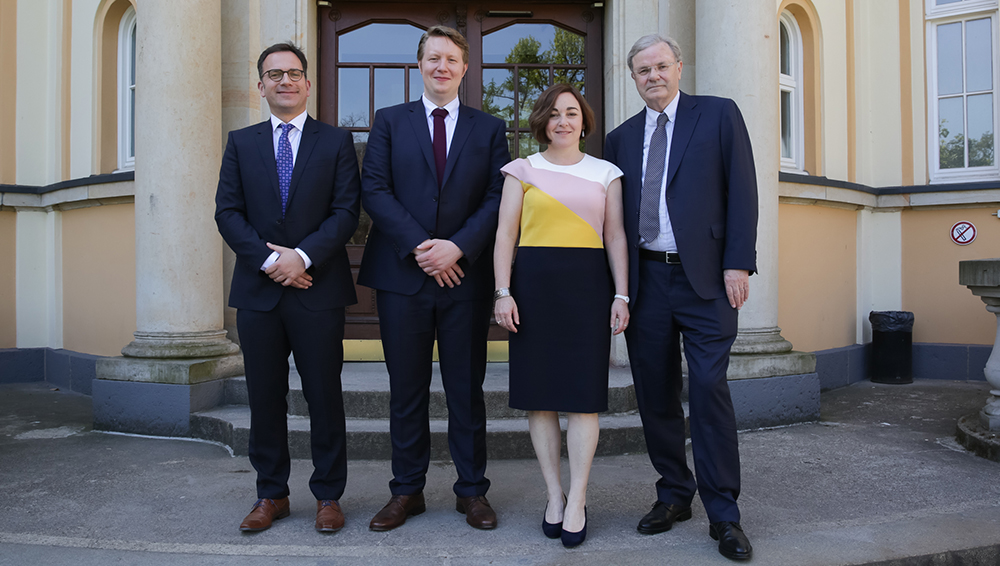 Hamburg, 4 May 2018. The Jung Foundation for Science and Research will be awarding its three annual awards for outstanding medicine in Hamburg today.

With a total of 540,000 Euro, they rank among Europe’s most valuable medical awards. The welcome speech at the award ceremony will be given by Hamburg’s first mayor Dr. Peter Tschentscher.

The Ernst Jung Prize for Medicine worth a total funding value of 300,000 Euro is awarded to scientists who have made an outstanding contribution to progress in the field of human medicine with their projects and who are expected to continue their successful work in the future. This year’s prize goes to Tübingen-based microbiome researcher Professor Ruth Ley and Freiburg-based neuroscientist and neuropathologist Professor Marco Prinz. Ruth Ley is the director in the Department of Microbiome Science at the Max Planck Institute for Developmental Biology in Tübingen. She is receiving the award for her pioneering work in the intestinal microbiome and the interaction between nutrition, organism and intestinal bacteria. Marco Prinz is a medical director at the Institute for Neuropathology at the University Hospital in Freiburg. He is being honoured for his ground-breaking research in the development and function of microglial cells. Microglia refers to a cell population which plays a key role in inflammatory processes in the brain.

The Ernst Jung Gold Medal for Medicine honours lifetime medical achievements of scientists who have made a major contribution to medical progress. This year, it is awarded to Munich-based biophysicist Professor

Wolfgang Baumeister for his work in the field of cryoelectron microscopy, as well as the structure elucidation of large macromolecular protein complexes. Wolfgang Baumeister is a director at the Max Planck Institute of Biochemistry in Munich-Martinsried. The award comes with a grant worth 30,000 Euro, which Baumeister can give to a young scientist of his choice.

The Ernst Jung Career Advancement Award for Medical Research is awarded to young scientists and is intended to help them set up and develop their first independent research projects with a total of 210,000 Euro over three years. This year, the award is given to Cologne-based virologist Dr. Till Schoofs for his work in deciphering mechanisms for virus control with antibody therapies in the HIV-1 infection. Till Schoofs is a research associate with the Institute for Virology at the University Hospital in Cologne. The Ernst Jung Career Advancement Award is the only one of the three awards which can be actively applied for. It is aimed at young doctors up to 35 years of age who want to continue their specialist medical training and research at a German hospital after completing a research period abroad lasting at least two years. Applications are currently being accepted until August 2018. Further information is available at www.jung-stiftung.de.

High-resolution image material of the event will be sent to you on Friday afternoon.

About the Jung Foundation for Science and Research

The Jung Foundation for Science and Research was founded in 1967 by Hamburg-based entrepreneur Ernst Jung and is now run by chairman of the board Rolf Kirchfeld. The Jung Foundation honours and supports basic research in human medicine and further research with clinical relevance to promote the development of new treatment options. The Ernst Jung Prize for Medicine, the Ernst Jung Gold Medal for Medicine and the Ernst Jung Career Advancement Award for Medical Research rank among the most valuable medical awards throughout Europe with a total of 540,000 Euro.