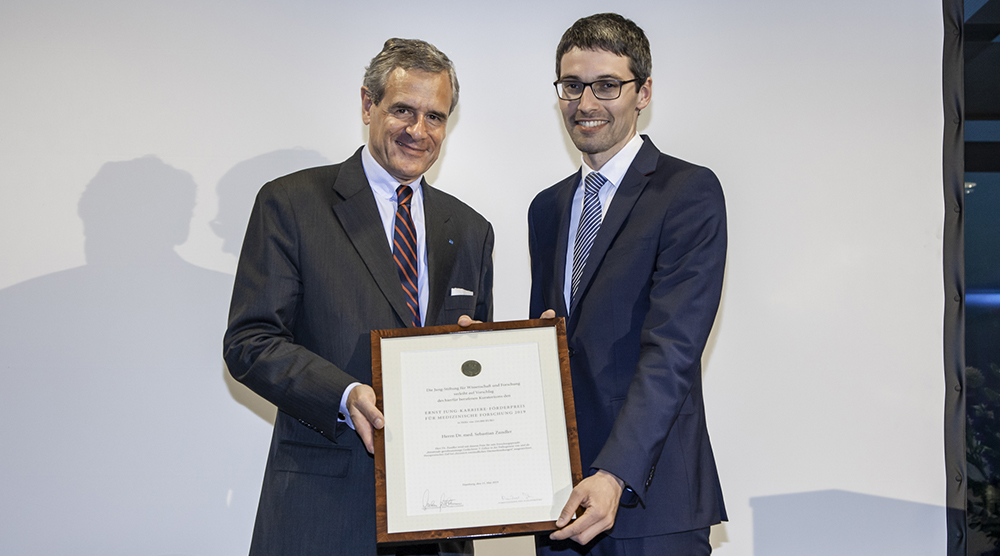 Hamburg, 23. May 2019. The Jung Foundation for Science and Research awards the budding gastroenterologist from Erlangen Dr. med. Sebastian Zundler the Ernst Jung Career Advancement Award for Medical Research 2019. He receives the endowment for his research project on the importance of intestinal tissue-resident memory T cells, (tissue resident memory = TRM abbreviated) in the development and treatment of inflammatory bowel disease. With a total price of 210,000 euros, the foundation is supporting Zundler’s project over a period of three years, to further research this type of cell with the goal to discover future therapeutic approaches.

More than 400,000 people in Germany suffer from the chronic inflammatory bowel disease, Crohn’s disease, or ulcerative colitis. The diseases run in episodes, in which the immune system in the intestine malfunctions and thus the intestinal tissue is destroyed. Despite advances in drug treatment, chronic inflammation can still not be adequately controlled in a variety of patients. In addition, it is largely unclear how the inflammatory episodes are triggered.

Sebastian Zundler is an assistant physician and a group leader at the Medical Clinic I of the University Hospital, Erlangen. He and his team believe that intestinal TRM cells may play a role in the development of these bowel diseases, as well as other chronic inflammatory diseases such as rheumatoid arthritis. “Preliminary work has already shown that TRM cells play a key role in triggering episodes and they control the immigration and development of other immune cells at an early stage of inflammation,” explains Zundler. “We were then able to show that TRM cells communicate with other immune cells and control these via different messenger substances.” The 30-year-old gastroenterologist wants to decode and understand this communication network in order to make it usable for therapeutic approaches.

After completing his studies in human medicine in Regensburg, Sebastian Zundler began working as an assistant physician and research assistant at the Medical Clinic I of the University Hospital Erlangen in 2014. In Erlangen in the following years, he was able to establish an independent research focus with several projects on anti-adhesion therapies for inflammatory bowel disease. In 2017, Zundler went to the Sanquin Research Institute in Amsterdam for a DFG-funded research visit to record his work on TRM cells and their role in inflammatory induction episodes. Even after his return to Erlangen, where he now leads a working group, these cells represent the main focus of his research.

Sebastian Zundler draws his motivation to work as a physician and scientist from the daily confrontation with a variety of challenges: “I enjoy being able to combine scientific analytics, manual activities and social interaction in my work.” Thus, he also considers it important in spite of all technical progress, that traditional medical skills such as interviewing or physical examinations, are still at the center of medical practice. “Only in this way can we treat patients really well and comprehensively.” Born in Stuttgart, he is married and the father of two daughters. In his spare time, he enjoys spending time with his family or devoting himself to running, which he used to do as a competitive sportsperson.

Young physicians can actively apply for the Ernst Jung Career Award. The call for 2020 runs until August 2019. It is aimed at physicians under the age of 35 who wish to continue their specialist training and research at a German clinic after spending at least two years researching abroad.