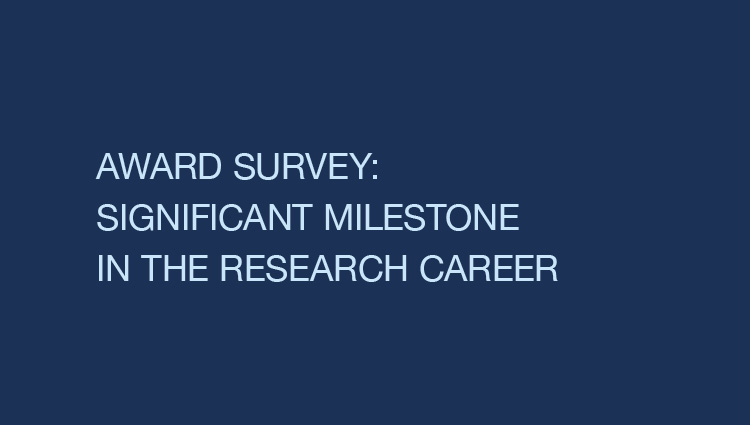 Hamburg, 17. October 2022. A survey of the prestigious Ernst Jung Prize for Medicine by the Jung Foundation of Science and Research underscores its importance for independent scientific research. The 33 participants highlight two aspects in particular: the influence of the prize as a springboard for further awards and its particular flexibility in the use of prize money.

Jung Foundation evaluates survey
The Ernst Jung Prize for Medicine, currently endowed with €300,000, is one of the most highly endowed medical prizes in Europe. It honors researchers and their projects that have made a significant contribution to the progress of human medicine and can be expected to do so in the future.

The award means much more than the prize money and the certificate alone can express – it is an important milestone in the research career of the award winners. This is evidenced by the extremely positive responses of the recipients of the Ernst Jung Prize for Medicine to a brief recent survey that was conducted by the Jung Foundation.

Prize as a stepping stone for further awards
Every November, the Foundation’s Scientific Advisory Board, which is made up of seven renowned international scientists, selects the laureates for the following year. These are among the top representatives of their field – and all of them receive other important awards in the course of their careers. Three of them have even been awarded the Nobel Prize: Prof Dr Rolf Martin Zinkernagel in 1996, Prof Dr Harald zur Hausen in 2008 and Prof Emmanuelle Charpentier in 2020.

These as well as many other awards are both reward and recognition for the pioneering research work of the scientists. Each one makes an important contribution to further disseminating the results to the scientific community and society. The Jung Foundation also wants to use its prize to draw international attention to particularly groundbreaking work. Therefore, its survey also posed the following question: Has the receiving of the Jung Prize helped the winners win further awards?

The results are clear: 19 of the 33 prize winners who participated in the survey see a direct or indirect connection between their Jung Foundation award and their other, subsequently awarded prizes. In this respect, the respondents mention a large number of appointments at universities and admissions to renowned medical academies as well as a total of 57 awards.

Gratitude for flexible use of prize money
A special feature of the Ernst Jung Prize for Medicine is that the prize money is awarded without conditions – the prize winners can use their prize money as they see fit. This flexibility was explicitly emphasized by the participants of the survey, especially two aspects of this financial freedom:
First, the free choice of research topic. By being able to define their field of research completely independently, researchers can react quickly and unbureaucratically to changing circumstances and adapt their focus (“navigate our constantly changing research environment quickly and non-bureaucratically”). Several awardees have used this flexibility to focus on Covid-19 – for example, to explore how the “SARS-CoV-2 virus trigger[s] severe lung disease” or to “launch the new XS15 vaccine booster against corona and cancer.”

Further, the flexibility of the prize money allows the winners to freely choose their concepts or methods. Many survey participants appreciate the freedom to “advance new hypothesis-driven research through exploratory approaches,” “rapidly implement unconventional ideas,” and “conduct experiment[s] that [are] scientifically risky but [lead] to new, unexpected results.”

Pleasing results for the Jung Foundation
The Jung Foundation for Science and Research is very pleased that its previous award winners see such a high value in their prize as a stepping stone for further awards and career stages. The foundation also sees this as confirmation of its commitment to awarding prizes to researchers who have not only already made a significant contribution to the progress of human medicine, but who show great potential to do so in the future. The extraordinarily flexible use of the prize money makes an indispensable contribution to enabling independent research in human medicine.