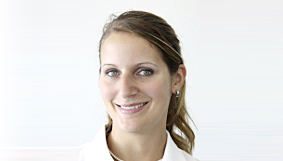 From T lymphocytes to tumour treatment

‘Intracellular Antigen Processing as a Key to Specific Cellular Tumour Treatment’ is the title of the research project of Dr. Anita Kremer, who is being presented the Ernst Jung Career Advancement Award for Medical Research in 2013. Three annual sums of € 70,000 each will aid the resident physician, born in Munich in 1980, in her research work at Erlangen University Hospital Medical Department 5 – Haematology and Internal Oncology. She has dedicated her research to the possibilities of obtaining specific T lymphocytes for targeted tumour treatment on the cellular level.

T lymphocytes are the most important defensive cells in the human body and may become physicians’ strongest ‘allies’ in tumour treatment. But there is a central problem to solve in the treatment of leukaemia: T lymphocytes from bone marrow donors should only recognise malignant cells in patients as being foreign and destroy them, without perceiving the recipient’s healthy tissue as being foreign as well and attacking it. Dr. Kremer has already succeeded in analysing intracellular processing sequences to identify a subgroup of T lymphocyte which may potentially be used to specifically eliminate leukaemia cells. She worked at the Leiden University Medical Centre Institute for Haematology in the Netherlands from autumn 2007 to the end of 2011. Thanks to the Career Advancement Award, Dr. Kremer will now be able to continue her important research project in Germany.