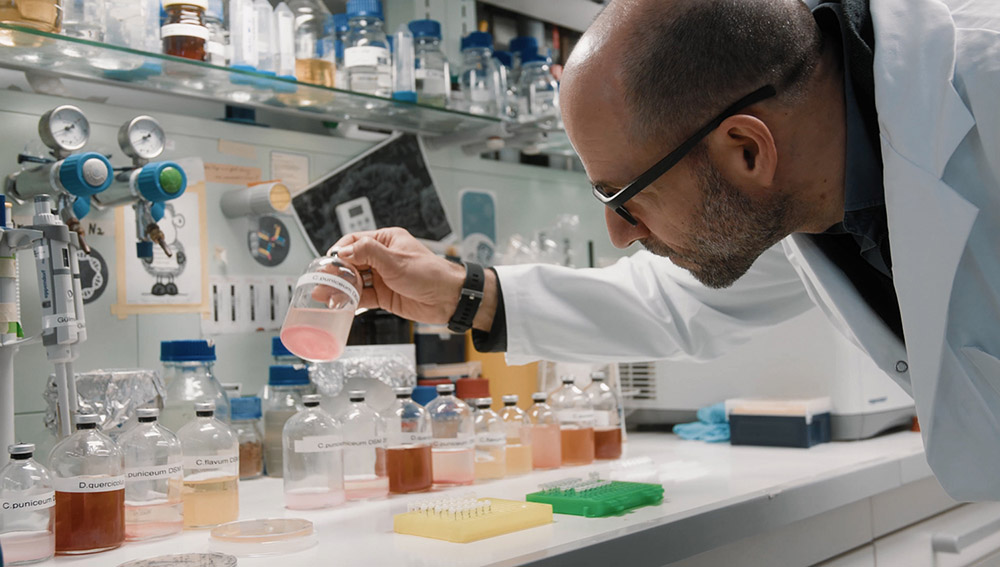 Hamburg, 20 May 2021. Metabolic products of microorganisms from which new antibiotics can be developed: this is one of the topics that Professor Dr. rer. nat. Christian Hertweck from the Leibniz Institute for Natural Product Research and Infection Biology – Hans-Knöll Institute (HKI) – in Jena is working on. He is now receiving the Ernst Jung Prize for Medicine 2021 for his outstanding research. The award, with a total prize fund of €300,000, is presented each year by the Jung Foundation for Science and Research in Hamburg to leading researchers whose projects make a significant contribution to medical progress.

Many substances produced by bacteria and fungi can lead to illness or poisoning. Others are able to cure infectious diseases, such as antifungals or antibiotics. The goal of Christian Hertweck’s research is to identify toxins and virulence factors as well as pharmacologically relevant substances and to understand how and why they form in microorganisms. Hertweck is deputy director at the Leibniz Institute for Natural Product Research and Infection Biology – Hans-Knöll Institute (HKI) – in Jena as well as head of the department for Biomolecular Chemistry there. He is also head of the Professorship for Natural Product Chemistry at Friedrich Schiller University in Jena.

His department works predominantly on the interfaces of microbe-host interactions and with study programmes relating to the environment. In addition to chemical analysis and synthesis, the scientists use genetic methods known as genome mining: ‘Many genes that could code for the biosynthesis of active ingredients remain still under laboratory conditions. With genome mining, we can specifically look for these genes and activate them,’ explains Christian Hertweck. In order to discover new types of natural substances, the researchers are primarily investigating microorganisms whose metabolic potential has had little attention or has been overlooked to date. ‘This enables us, for example, to identify active substances that might otherwise have remained undiscovered,’ Hertweck adds. To optimise these types of natural substances, they also use genetic recombination: ‘We change selected genes within the biosynthesis pathway. This is how we increase the structural diversity of the active ingredients, and thus also their effectiveness,’ Hertweck explains. The 51-year-old researcher has had several internationally renowned discoveries in the field of drug research. His work on the biosynthesis of active ingredients with unusual structures has attracted considerable attention worldwide.

Christian Hertweck has already received the Gottfried Wilhelm Leibniz Prize and is now receiving the Ernst Jung Prize for Medicine 2021. ‘It is a great honour to be awarded the Ernst Jung Prize, as I associate philanthropy, open-mindedness and generosity with the founder Ernst Jung,’ says Hertweck. ‘The unique foundation philosophy makes the Jung Foundation Prize very special in my eyes – where far-sighted, interdisciplinary research and free thinking are promoted.’ Hertweck shares the prize equally with the Munich-based metabolic researcher Professor Dr. med. Dr. h.c. Matthias H. Tschöp. Accordingly, he will receive €150,000 to recognise and further promote his work. The Jung Foundation has been committed to the advancement of human medicine for over 40 years. With the Ernst Jung Prize as well as two additional awards, the Foundation provides more than half a million euros each year for the benefit of science.